What we did with an LED, we wanted to do with an Arduino next. I used an Arduino Mega and wrote a little program to sense and estimate the machine sewing speed, based upon using the machine as a switch. The program is based on the "Button" example that turns on an LED when a button is pressed. It specifies the set-up as follows:


This is the circuit for it. In my case, the sewing machine would constitute the switch... I won't insert that picture here without a big warning sign because Andy (thanks Andy) showed me why I should not do it like this.

The sewing machine just makes a simple switch with its upper thread lever and the newly inserted PCB, but putting it into the same circuit like a normal switch is dangerous, because it isn't just a switch... it is itself an electrical instrument connected to mains power and, when so, most likely to ground. In case something goes wrong, and the lever is up/switch is closed, we might have a direct connection from the power source on the Arduino to the ground, with no resistor in between... a recipe for trouble.
We opted to put the (probably ground-connected)  machine on the safe side -- where the 'ground' connection of the Arduino is -- like this: 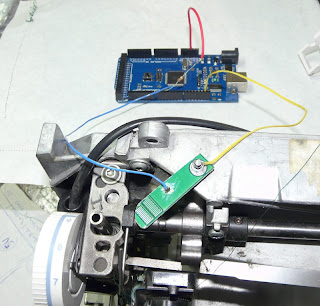 The Arduino program to sense the machine speed from this is a very simple modification of the Button example. It doesn't use interrupts to know when the lever position has changed, it just runs in a loop. It uses a very simple heuristic to try and eliminate noise:We know that the minimum length between stitches is 75ms, so it's making the assumption that any two "needle ups" that were sensed less than 40 ms apart are noise, and ignores those.


Here is some example output:

... as can be seen, the stitch length estimated by the program varies quite a bit -- actually, upon every other stitch -- whereas we know from a look to the oscilloscope that the stitches are quite uniform in length and frequency. This is probably due to the lever bouncing a few times on and off as it hits the PCB during each stitch. We will either have to improve the smoothing algorithm or the input signal.
Posted by Barbara "PC-Monster" W at 03:19