The first step will be: Just to fit a sensor somewhere, then hook it up and see whether we can actually sense the position of the needle or the position within the rotation cycle of the machine.

Then, feed that measurement into an Arduino.

Today I've taken some better pictures.
And I have had a lot of help -- thanks Bernd. Thanks everyone for their input. Thanks Unknown, for the suggestion of the light or magnetic sensor.
You said: I could put a sensor in the middle of the bed shaft. 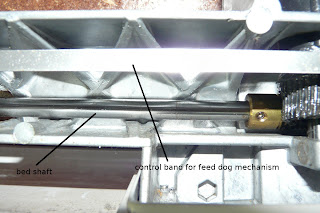 It sounded a good idea, but when I opened the machine today, I noticed that it won't be possible, because the (rotating) bed shaft is too tighly nudged into a corner of the cast-metal frame of the machine. There is just no space around it. The flat band in the foreground is reasonably free, but it is not the shaft, it is part of the control mechanism for the feed dogs.

Thanks to Bernd who took a lot of time with me to evaluate different options.
We thought for a long time to attach a sensor that would sense the up-and-down movement of a lever somehwere in the actual vicinity of the needle movement.
These are two close-up pictures of the different phases of the needle movement. Points A, B, and C were all discussed as anchor points for attaching a sensor -- or a magnet which is sensed by a magnetic sensor.
Admittedly I have the feeling it's much too crowded there, and there is hardly any space to put anything in that wouldn't interfere with the existing mechanism.

But I have found out that not any old "up"  position of the needle will do. The needle is high enough "up" over easily 1/4 of the whole rotation of the shaft, but over most of this, the upper needle thread is still caught somewhere within the guts of the bobbin mechanism, making a turn around the bobbin to wrap itself around the bobbin thread and create a stitch. In this position, if a seam has just been sewn, the fabric cannot be pulled out of the machine because the threads are still caught in the mechanism. That means that the motor has to stop at indeed one very particular point of the cycle, which appears to be the time when point A is highest.

Unfortunately, then, I can't see how we would be able to sense both the "up" and the "down" position of the needle -- because both are needed variously.

So far we mostly thought about two candidates for machine rotation sensing solutions:

What Unknown suggested might actually work on the (top) arm shaft: 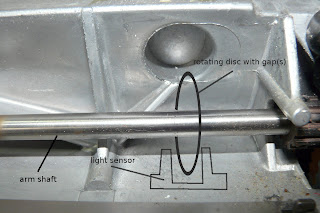 Please apologise the very bad drawing.
There is a little bit of space within the frame around this shaft.
Disadvantages:

At the back end of the machine, where the big drive wheel picks up the rotation from the motor, there is a little bit of space that might be of interest: 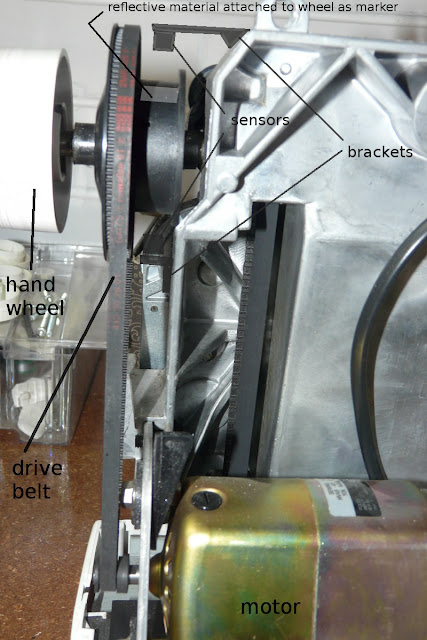 Main disadvantage: The brackets -- they'd have to have very particular, exact shapes to hold the sensors at the right places. Here is a picture of the same thing from the top: 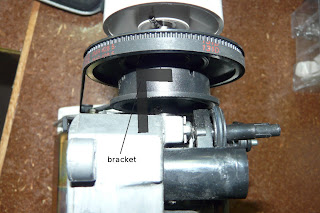 Different to what I wrote before, the machine easily does 10 stitches per second, so 600 per minute, which would mean the motor then probably turns 8 times as fast, at 4500-4800 per minute.

I was told that it would be difficult to tell a conventional motor to stop that precisely at a certain point. I'll take my chances and try...

We had a look the foot control of the machine and found it contains a potentiometer that seems to range between 0 and 100 kΩ.

Thanks very very much to Bernd for all his help, assessments, and suggestions.